There are no festive decorations, no plates of cookies or happy parties to attend.  And yet, there is anticipation.  There is glee and excitement.  I whistle down the corridor.  I cannot stop smiling.  We have at long last arrived at the eve of transplant.  The truth is that eleven days ago, I did not know if Allistaire would make it to this day.  Her cancer seemed to be popping up in a new place everyday.  At so many points, it felt like everything could just come crashing down.  Yet, the Lord has opened door after door, and here we are.  There continue to be zero blasts and everyday she seems more her vigorous little self.  Today marked the last day of radiation and the radiology oncologist remarked how amazing the transformation has been since she first began radiation.  So while her lymph node has certainly responded to radiation and is now down to nearly the size of a pea, her greatly improved demeanor and mobility cannot be credited to radiation.  Could it be that the chemo, Decitabine, that was really just a stand in until conditioning chemo, really had a significant effect?  What I know is that my girl walks again and chats and makes silly eyes and sings and engages staff in her antics and is a joy.  I know that the blasts in her marrow are down from 76% to 51% in 16 days and her peripheral blasts are at zero.

Tomorrow conditioning begins, and while conditioning is not the showy, grandiose part of transplant, it is absolutely as essential.  I always scoff at the word, “conditioning.”  It sounds so gentle and kind.  I think of the conditioner for my hair and its long list of healthy ingredients meant to nourish.  No, this is an altogether different sort of conditioning.  We have at hand a situation in which there is something dwelling inside Allistaire that will most certainly be the death of her if it is not destroyed.  It is a formidable foe and requires obliteration.  The goal of the two chemos Allistaire will receive is to utterly wipe out her bone marrow.  The toxicity of the chemo is so great that her marrow would never recover on its own, hence the need for donor marrow to come in for the rescue.

My goal at the moment, is to give a few basics regarding the timing of things with this whole transplant process, and to give specific drug info in terms of the purpose or each drug and if there are major side effects of long-term consequence warranting mention.  Because a bone marrow transplant is an actual process rather than one event, it is defined in large part, by a time line.   At the center of the time line is the actual day of transplant, where the donor cells are given in an infusion to Allistaire.  This day is known as, “Day Zero.”  Anything that precedes the actual transfusion of the donor cells, or Day Zero, is counted backwards.  This means that tomorrow, June 12, 2013, is referred to as, “Day -6.”  On days -6 through -1, she will receive her conditioning chemos, which is the focus of this post.

On Wednesday, June 12th, Day -6, Allistaire will begin conditioning with one of two main drugs.  The primary drug is the study drug in the clinical trial, Clofarabine, which will be given in a one-hour infusion sometime in the afternoon.  Because people sometimes have allergic reactions to Clofarabine, Allistaire will be pre-treated with the steroid, Dethamethasone, each of the five days prior to receiving her Clofarabine. The Dethamethasone acts as an immunosuppressant to prevent her body from creating an allergic response to the Clofarabine.  Of course there are with Clofarabine, all of the ordinary possible side effects of chemo such as headache, nausea, fatigue etc.  The more concerning possible side effects, which occur in less than 10% of patients, are, “seizures, irregular heart beat, fluid around the heart, multi-organ failure, death, inflammation of the pancreas, and capillary leak syndrome, where the small blood vessels fail to contain blood plasma, which then leaks into tissue, causing sudden blood pressure drops and possible fatal complications.”

On Day -5, from 6am through 9am, Allistaire will have an infusion of the chemo, Busulfan.  Her blood will be drawn just prior to the infusion and directly afterward, and a few additional times during the day, in order to check the level of concentration of Busulfan in her blood.  The doctors know the concentration they are aiming for, therefore, the blood tests will enable them to either increase or decrease the dose the next day to better achieve the goal level.  If for some reason the first dose was under the goal, they would not simply increase the next day’s dose to meet the goal, rather they would overshoot the goal in order that the average over all days of receiving Busulfan, would meet the goal.  Busulfan carries a risk of seizures and so on days -6 through day zero, she will also be given the anti-seizure medication, Keppra.  It seems with Busulfan, the primary risk is that of seizures which is greatly mitigated by the anti-seizure medication.  However, with both Clofarbine and Busulfan, the mucus lining of the digestive tract, from the mouth all the way down, is greatly destroyed, which often results in very painful sores.  Sores in the mouth often make it too painful for patients to eat and so they will be given TPN which is basically liquid nutrients given intravenously.  Additionally, because both chemos will be destroying Allistaire’s bone marrow, they will be utterly destroying her immune system, completely decimating her blood counts and putting her at risk for infection like never before.

While Clofarabine alone is given on the first day, each subsequent day, both Clofarbine and Busulfan will be given for a total of five days of conditioning.  On Monday, June 17th, Sten and I will have been married for twelve years and one day, and Allistaire will be given on this Day -1, a “day of rest.”  This Day of Rest is essentially a day for the chemos to wash out of her system prior to receiving her new cells.  On Day Zero, Tuesday, June 18th, a woman on the other side of the earth will have her blood drawn out of her for hours and her stem cells will be collected.  They will then be flown, on ice, to Seattle/Tacoma airport.  The cells will then be taken to Seattle Cancer Care Alliance where tests will be done to confirm they are the correct cells and to possibly reduce the volume of cells in accordance with the protocol guidelines.  At long last, the cells will be transported to Seattle Children’s Hospital and then infused into Allistaire, much like a blood transfusion.  Because the donor cells are coming from Europe and because they will likely have to be reduced, it is very possible that Allistaire will not actually get her cells until the wee morning hours of Wednesday, June 19th, in which case she will actually have two Day Zeros.

So it’s now past midnight and I know that I will be having to get up with Allistaire at 2am to help her take her medication, Allopurinol, which helps counteract the effects of tumor lysis.  I love the idea of tumor lysis because it is the image of cancer cells being ripped to shreds.  The downside can be all of the caustic goo the destroyed cancer cells can then dump into Allistaire’s blood stream.  In anticipation of this, lysis labs are drawn once or twice a day to determine the level of uric acid  and she is given the Allopurinol that treats any excess uric acid.  I will also stand on the scale cradling her while our cumulative weight is being taken.  I’ll get her settled back into bed then get weighed myself, so that the difference can be calculated to determine Allistaire’s weight.  Weights are very, very important in transplant because of the many ways in which fluid retention levels can get severely out of balance.

I am so tired and so very thankful to be at this day. 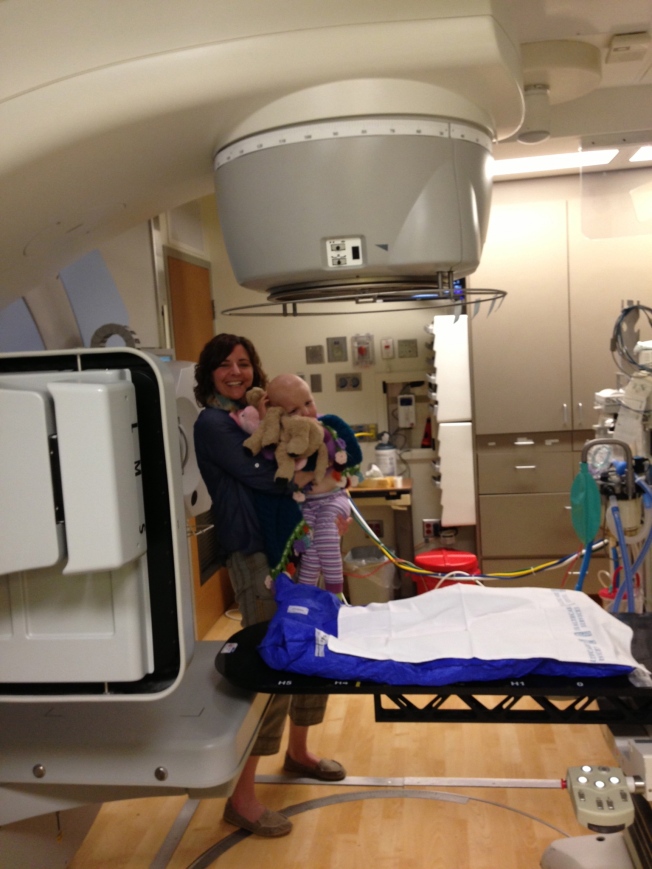 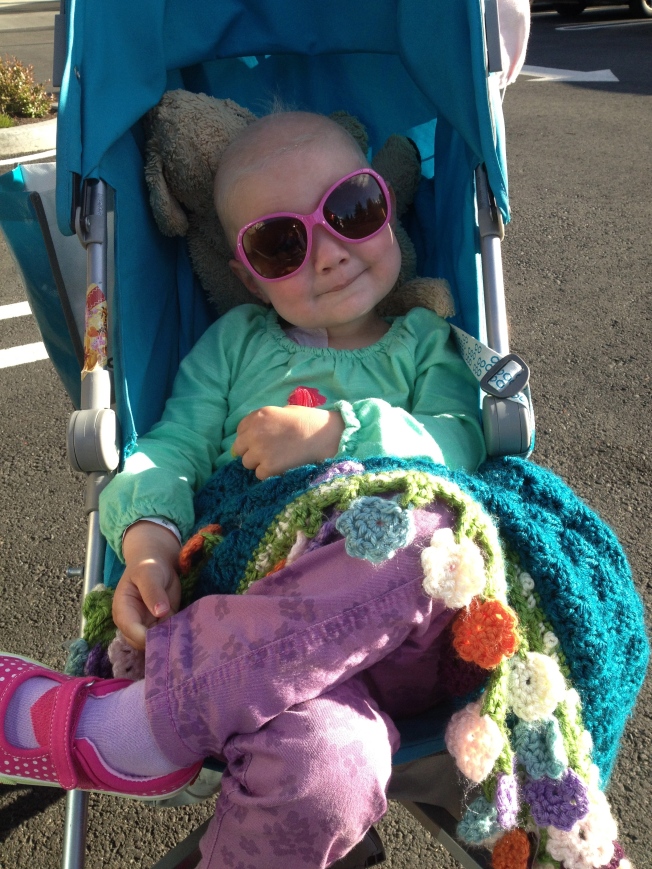 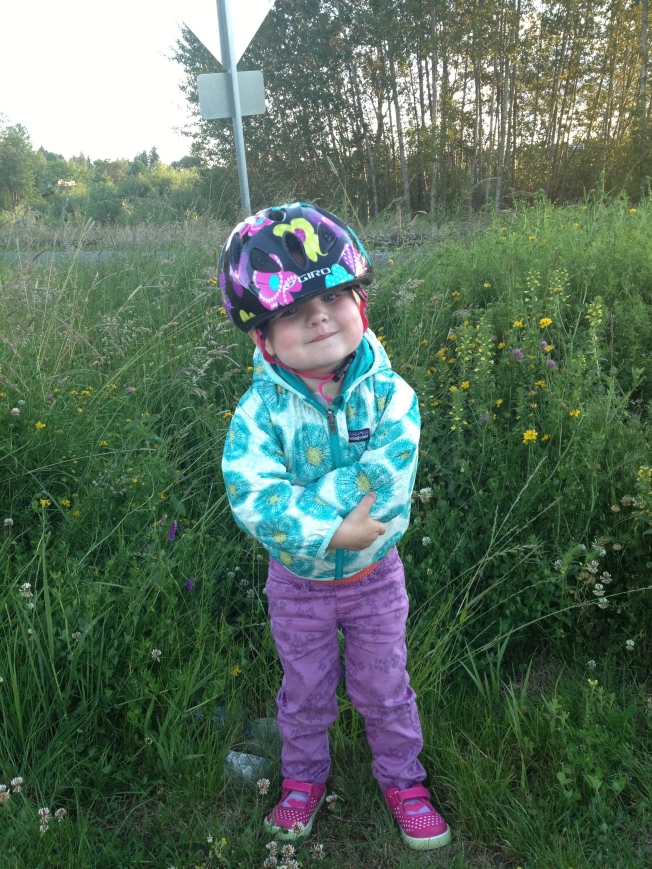 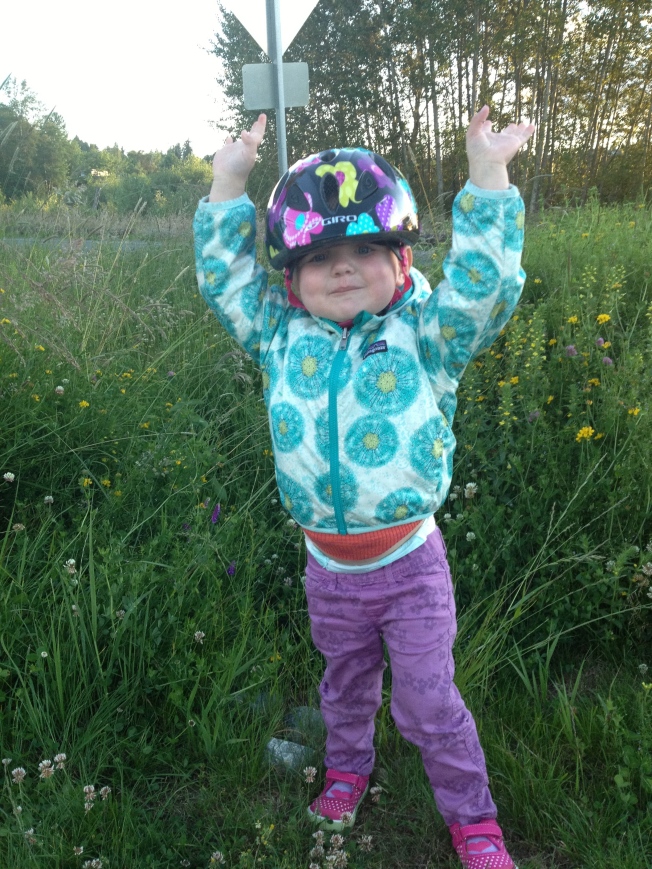 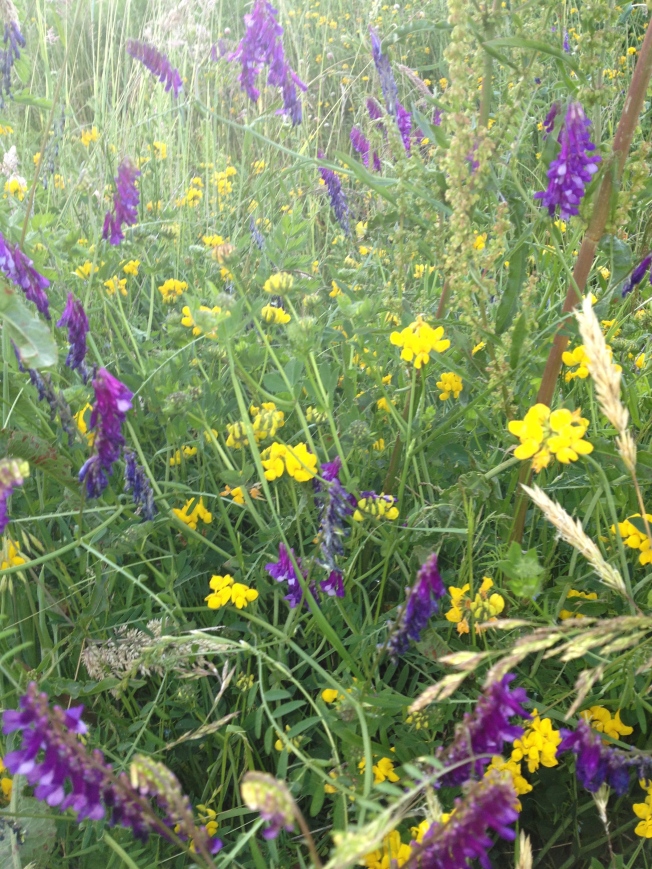