When I was a student at the University of Washington, I took Chemistry for three glorious quarters.  I remember sitting on the edge of the wooden lecture hall seat, entranced as my professor pointed out that there would be no life on our planet if the water molecule, H2O, was not bent, but instead linear.  By being bent, the water molecule was polar and thus acted like a little magnet, sticking together with a whole bunch of other water molecules, allowing vast amounts of H2O to remain in liquid form.  Ah, the wonders of water.  I sat with mouth obnoxiously open, in awe that such a simple thing was the difference between life or no life on our planet.  Another day I ventured up to the fourth floor where the entire building seemed to shake with the vibration of exhaust hoods.  I peeked into tiny lab windows to see glass vials and beakers and strange glass labyrinths.  I salivated trying to take in the fantastic complexity of the Molecular Pathways poster in the hallway.

Petri dishes and slime molds, bunsen burners and little pins thrust into wax to hold open the chest cavity of a frog.  All sorts of strange images enter my mind when I think of scientific research.  I can see odd folks milling around in white lab coats, hunched over microscopes and clicking the keyboard to record data.

Here is another image.  Big blue beautiful eyes, wispy blonde curls of hair, a line of little white teeth set in a grin – dimple on the right, hands still chubby and small.  Then listen, hear that sweet, wee voice with wonder mingled in and the declaration that those same blue eyes have just now spied a red-winged black bird.

Research is what has saved Allistaire’s life, not just once, but over and over again.  You scrub the end of the line coming out of her chest with an alcohol wipe for 15 seconds and you let it dry for 15 seconds before you enter the line, because research has shown this is the most effective way at killing any bacteria that could  lead to a line infection which could lead to serious illness or even death.  Cytarabine, fludarabine, mitoxantrone, daunorubacin, decitabine, busulfan, clofarabine, azacitadine – super weird words, absolutely yes, but also crazy amazing discoveries from plants and sea life and dirt that eventually were shown to be effective against that wretched killer, Acute Myeloid Leukemia.  But how much do you give and how long and in combination with what other drugs?  Is one round of chemo enough or should we risk burdening that little heart pumping blood again in hopes that the cancer is really, really gone this time?  And what of her liver and kidneys and the other parts of her flesh she needs to keep her alive, how do we protect those and kill the killer?

Research may seem abstract.  I mean really, even cancer seems abstract.  What is it anyway?  Most of the time you can’t see it, so how can you really die from it?  I’ve seen cancer.  Cancer is when your child sleeps 20 hours a day and turns ghost white because almost all of her red blood cells have vanished and been replaced by the insatiable multiplication of cancer cells.  Cancer is a boy’s face warped and deformed from the massive pressure of neuroblastoma tumors pressing against the skin.  Cancer is the girl in the wheelchair, unable to walk because both legs have been sawed off – a gruesome trade to try to save her life.  Cancer is that person you hear is a teenage girl but you can’t tell because she has wasted away and her features have become featureless, her skin covered in a barrage of sores and bruises.

Research takes that white, lethargic little girl, unwilling to walk, and turns her into a feisty force to be reckoned with as she whirls around the Oncology Unit on a bike and grows old enough to carry on a conversation with you and play school with her big sister.  Research discovers that you can kill those horrifying neuroblastoma cells with re-engineered T-cells from the child’s own body.  Research allows the loss of legs to be a worthy trade-off because the spirit of that girl shines bright in her eyes and her smile beams as she races down the sidewalk, gloved hands on wheels.  Research is what gives the mom who lost her daughter, hope that more girls will be able to go to their prom and graduate from high school.  I have seen research – giving life and breath to faces held dear, no longer abstract but vividly tangible.

It has almost been one year since I sat at the conference table across from Dr. Dahlberg, trying to hold back the tears as she explained that Allistaire had less than a 10% chance at survival and that in ordinary circumstances there would be nothing left to offer her.  It could have been as simple and unfathomably monumental as it being time to take her home to die.  But there it was, Clinical Trial 7617A – an open door, a chance at life, a gift that would cost $1,100,000 and ultimately, sustained Allistaire’s life.  The tears were hot from terror and streamed down a face full of joy and smile.

Fred Hutchinson Cancer Research Center decided to invest in a study that would look at the effectiveness of the anti-leukemic effects of combining the chemotherapies, Busulfan and Clofarabine.  The study had only opened about a month prior and would end up closing not very many months later.  Allistaire’s transplant succeeded in two major ways.  It cleared all of the detectable leukemia from her marrow and in so doing made way for the wondrous mysteries of someone else’s immune system to enter into her body and begin a gorgeously complex fight against her foreign cancer cells.  When tiny traces of cancer was found in August, it was the team of doctors at Fred Hutch who fight adult AML that were able to recommend a chemotherapy that had potential to fight back the cancer while Allistaire’s new donor cells could fully mature and mobilize against the few remaining cancer cells.

On August 9th, 2013, I was told that because there was still cancer after her transplant, Allistaire had a 5% chance or less to survive and more than likely, would live no more than 6 more months.  Of course, that was based on the most current data.  You see, giving someone a bone marrow transplant without being in remission, had almost never, ever been done.  This was new territory.  This was a landscape in which there weren’t statistics to color the details.  Anything was possible.  Why?  Because of research.  Because people like you, can give money to fund the most amazing and promising research you can imagine.

Actually, most of us can’t imagine it, because it is simply too complex and amazing.  But there are teams of doctors at Fred Hutchinson Cancer Research Center who spend all day long, every day, trying to imagine the possibilities and then put them into action.  And these are not just socially awkward folks who sit in a lab all day long.  There are probably those and thanks be to God for them, but they are also the doctors who have morning after morning bent down in Allistaire’s hospital room and joked with her and cared for her while also attending to the details of her flesh.  These are fellow moms and dads who cherish their own children and who allow that love to fuel their passion to keep pursuing cures for cancer.

On the morning of August 10th, 2013, the day after the very worst news of my life, I got on my old crusty, 1995 mountain bike and rode 25 miles in Obliteride.  Obliteride is a bike ride put on to raise funds for Fred Hutchinson Cancer Research Center, 100% of which goes directly to cancer research.  I road with my dear friend, Emily Vahey on one side and my sweet, sweet sister-in-law, Jo on the other.  It was quite an incredible experience to gather with hundreds of other people and ride for the people we love, known and unknown.  Together, the three of us raised about $13,000.  All in all the ride raised $1.9 million dollars for cancer research.  Though my eyes still bore the marks of hard crying the night before, it was a day also of joy and hope for what can be accomplished when people rally together for good – for the hope of a day when the monster, cancer, will be defanged.

Thank you SO much to each of you who so generously gave last year to Obliteride.  For some of you it was a tangible way to show Allistaire and our family love.  For others, it was a way to give thanks for your own lives spared because of the virtues of cancer research.  And for yet others, it was a memorial for someone dear to you already lost.  For one woman, it was her way of loving her grandchildren, a way to give them a better chance at life in the future.

Giving money to Obliteride to further the cancer research at Fred Hutch is a tangible way to love.  Yes, it is beakers and strange whirring machines, but it is also that sweet little goofy face in front of you, it is your mom’s face and your own.

This year I will be riding the 50-mile route which goes across beautiful Lake Washington and have made a commitment to raise at least $1,250.  My dear friends Emily Vahey, Lysen Storaasli and sister-in-law, Jonell Anderson are also riding with me and have made the same fundraising commitment.  So if you know me through one of these fantastic women folk, please donate directly to Obliteride under their name and help them reach their goal.  If you would like to support me in Obliteride and help OBLITERATE CANCER, click on the blue link below: 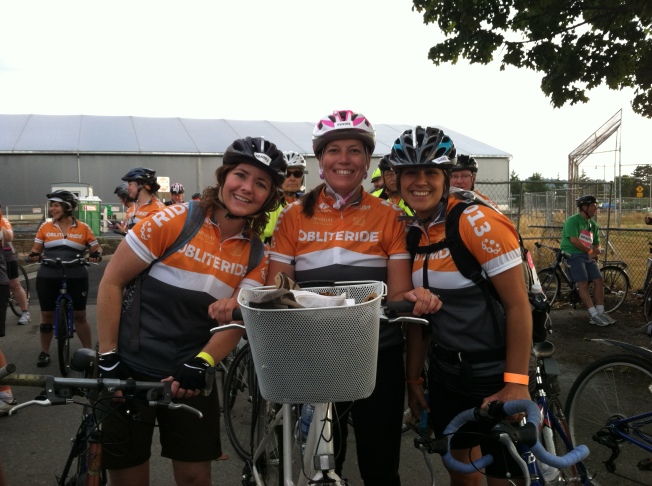 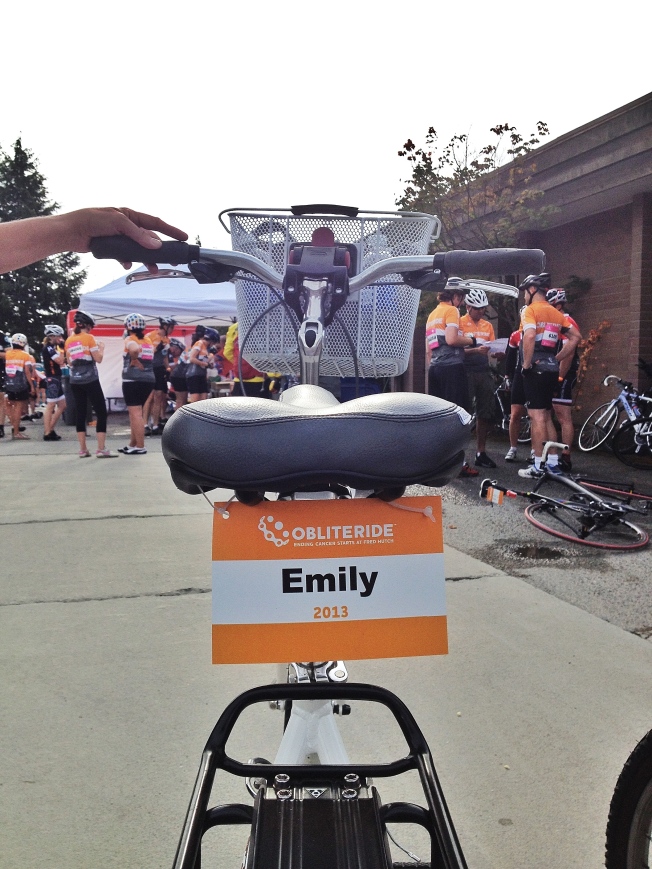 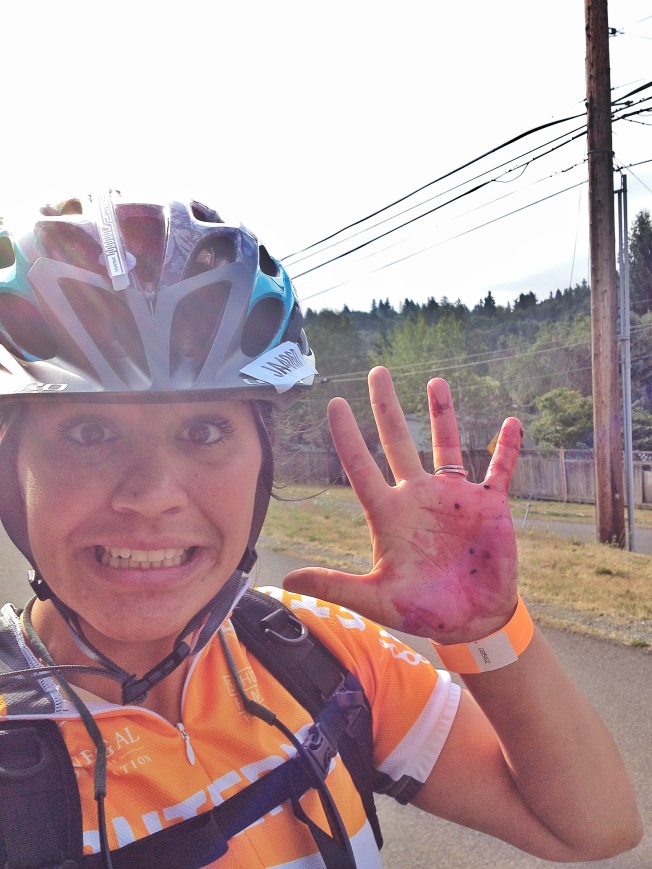 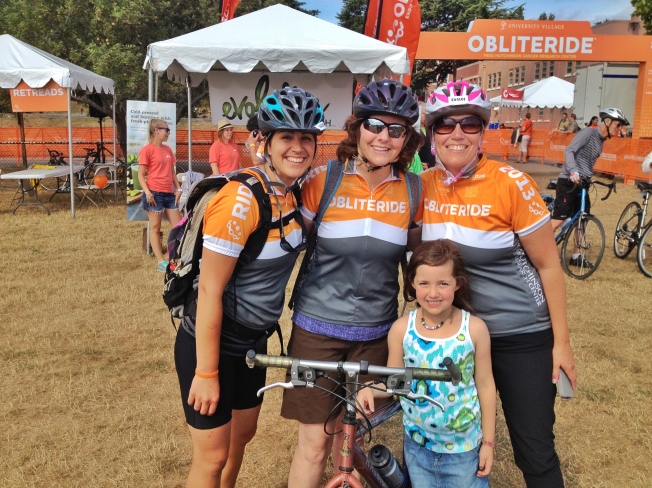 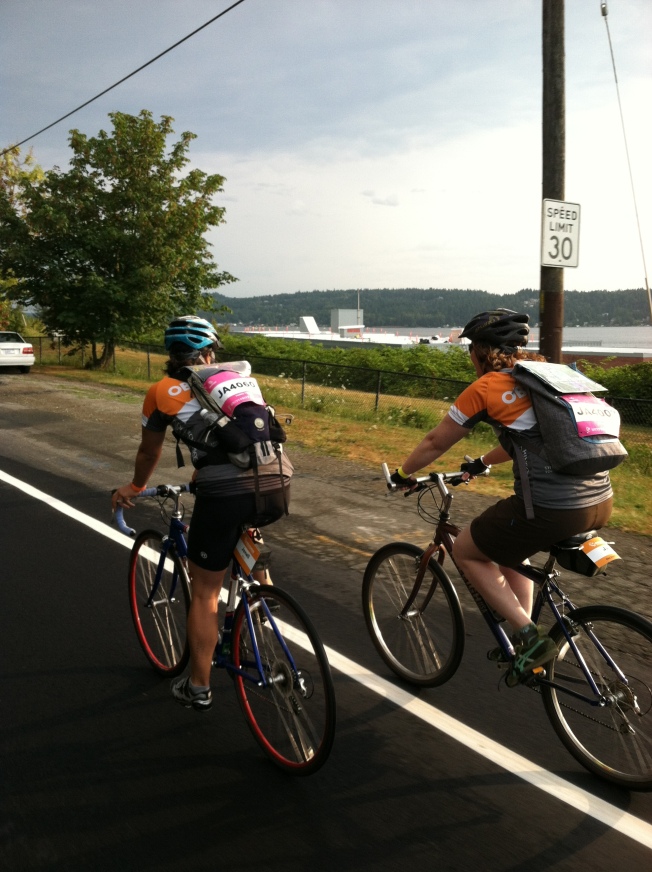 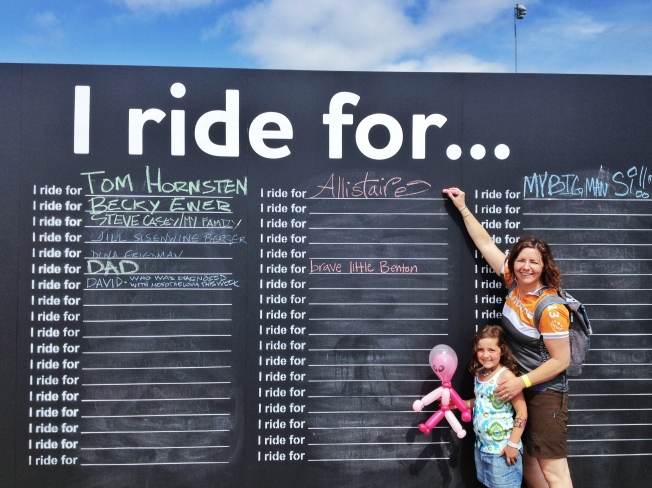 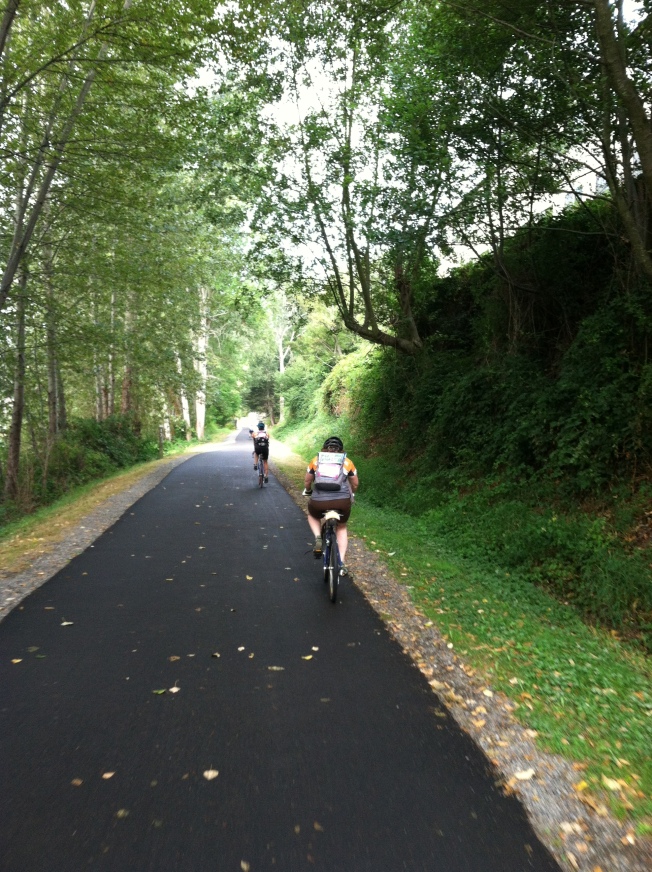